During World War I, over 90% of American pilots learned to fly in the Curtiss JN. Better known as the Jenny, the Curtiss JN series is actually a hybrid design. This project began when Curtiss toured England during World War I. He met British engineer B. Douglas Thomas, then working at Sopwith Aviation. Curtiss soon hired him to design a two-seat, tractor airplane around the Curtiss-built OX-5 engine. The final design is the combination of Curtiss's Model N blended with Thomas' Model J. 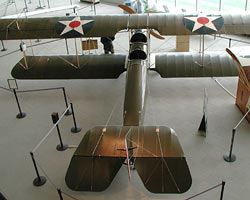 With the end of WWI, the U.S. government quickly cancelled war contracts and began selling surplus military equipment. Glenn Curtiss bought back $20 million worth of equipment, mostly Jennys and OX-5 engines, at a cost of 13 cents on the dollar. Meanwhile, Curtiss began an extensive marketing campaign highlighting the many civilian applications of the Jenny, which included:
Among those who purchased a surplus Jenny was a young Charles Lindbergh who paid $500 for one in 1923.

When airmail service began in 1918, they used 6 Jennys supplied by the U.S. Army. Major Rueben Fleet ordered 6 JN-4Hs directly from Glenn Curtiss. Fleet wanted larger fuel tanks to extend the Jenny's range and the front cockpit replaced with a mail hopper to hold 300 pounds of mail. Fleet also wanted the work completed in 8 days. The Post Office used the modified Jennys to prove airmail was a viable service. In the first year, Jennys helped airmail pilots complete 92% of their scheduled flights. However, officials soon wanted an airplane able to carry more mail and fly farther.

This JN-4D was built in 1916 and is on loan from the U.S. Army Center for Military History. Unfortunately, its history before being discovered in pieces near San Antonio, Texas remains unclear. The U.S. Army gathered up the remaining bits and the Virginia Aviation and Machine Company, Ltd restored the biplane in the 1990s. A monumental task, this meticulous restoration took over 12,000 man-hours to complete and retained up to 60% of original Jenny parts. Some of the parts are original Curtiss Jenny parts, but not original to this particular aircraft. Parts that had to be fabricated were made in strict accord with original Curtiss factory drawings.